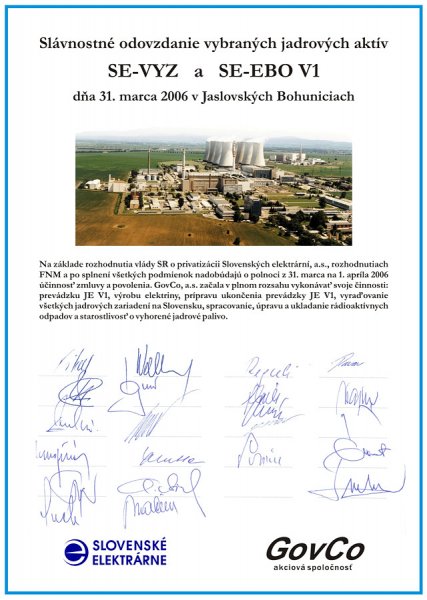 The forming of this company is tightly related to the privatization of the Slovenské elektrárne company. One of the major postponing conditions in the transaction documents on the privatization of Slovenské elektrárne, was the detachment of selected nuclear assets (detached plants SE-VYZ and SE-EBO V1), in which the Italian ENEL company was not interested. For this reason, on 6th July 2005, Slovenské elektrárne formed a subsidiary, the GovCo company. After the book entry of the shares, the Company was purchased by the government, represented by the Ministry of Economy of the SR. In the same year preparations to detach the selected nuclear activities were made, which included a whole range of activities, including the smooth transfer of administration and operation of these assets from SE, to the new company.

Based on the Slovak Republic Government resolution on the privatization of Slovak Power Plants, the resolutions of the National Property Fund and following the meeting of all conditions, contracts and permissions came into power on the 1. 4. 2006, based on which the GovCo company, assumed  responsibility for the operation of the V1 Nuclear Power Plant, the decommissioning of nuclear facilities and the treatment of radioactive waste and spent nuclear fuel.

The initial status of the company in the Slovak energy sector was determined by the results achieved during the long-term operation of both facilities. The Company is in charge of the decommissioning of the V1 Nuclear Power Plant as well as the decommissioning of the A1 NPP, which is currently in its second stage. The company also operates the Bohunice Radioactive Waste Treatment Centre, bituminization and vitrification facilities for radioactive waste treatment, a fragmentation facility for metallic radioactive waste and the National RAW Repository in Mochovce, which is, in terms of safety standards, one of the top European installations of that kind. Furthermore, the company is responsible for the operation of the seismically resistant and compacted Interim Spent Fuel Storage Facility in Jaslovské Bohunice. The Final treatment of Liquid Radioactive Waste in Mochovce is now being put into operation. Also, a new liquid radioactive waste treatment facility has been put into operation.

After meeting the legal requirements for performing the given activities, the GovCo company was issued licenses by the following supervisory bodies: The Public Health Authority of the Slovak Republic, The Ministry of Environment of the SR, The Technological Inspection of the SR, The National Labour Inspectorate, The Regulatory Office for Network Industries and The Nuclear Regulatory Authority of the SR.

Prompted by its single shareholder, the Ministry of Economy of the SR, the company changed its name to Jadrová a vyraďovacia spoločnosť (JAVYS — Nuclear and Decommissioning Company) with its seat in Jaslovské Bohunice.

By the decision of the company's single shareholder, on the 26th of September 2008, the company seat was moved to Tomášikova 22, 821 02, Bratislava.