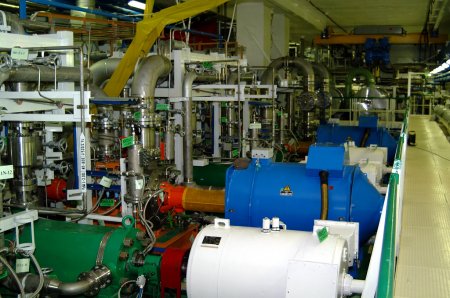 Drives of pumps of emergency charging

The loss of control over a fission reaction results in an excessive accumulation of thermal energy. The design solution of the WWER 440 nuclear reactor guarantees that, in case of a temperature increase in the reactor's active zone, the intensity of the fission reaction is decreased and, as a consequence, the temperature in the active zone decreases also, thus it eliminates the possibility of the initiation of an uncontrollable fission chain reaction.

But the physical design of the WWER 440 nuclear reactor itself does not eliminate the possibility of other malfunctions, e.g. the bursting of a pipeline, the failure of pumps, the loss of power supply to individual technological units. Such malfunctions could lead to the releasing of radioactive substances into environment, in amounts exceeding the permitted limits. In spite of the fact that the probability of such occurrences is very low, there are several mutually independent safety systems installed in a nuclear power plant, which minimize the possible consequences of malfunctions.

Safety systems can be divided into passive systems, which are activated spontaneously (they require neither electrical, nor mechanical power supply) when parameter limits in the primary circuit are exceeded, and active systems, which are driven by electrical pumps. The main task of the safety systems is to prevent the melting of nuclear fuel, to transport heat away from the reactor's active zone, and to decrease the pressure in hermetic areas in order to maintain the integrity of individual safety barriers under various operational circumstances. Safety systems are 200 percent redundant, what means that each system is composed of three identical independent systems, from which only a single one is sufficient for accident prevention. The systems are located in separated areas and each of them has an independent power source.

The vacuum-bubbling system and the hydro accumulators are passive systems. The vacuum-bubbling system is a part of the hermetic areas. Its task is to decrease pressure in a hermetic zone by condensing steam and to contain non-condensed coolant elements leaking from the primary circuit, during a malfunction. The Bubbling system has 12 floors — trenches filled with boric acid. Hydro accumulators are reservoirs filled with a solution of boric acid, which flush the reactor’s active zone with their content in case of a pressure decrease in the reactor, caused by a malfunction.

Active safety systems comprise a high-pressure and a low-pressure refilling system, and a spray system. The role of the first two systems is to secure the influx of the boric acid solution into the primary circuit in emergency situations, utilizing the absorption properties of boric acid, i.e. its capability to absorb neutrons. The increase of boron concentration in the primary coolant interrupts the fission reaction and allows the heat to be transferred away from reactor’s active zone at the same time.