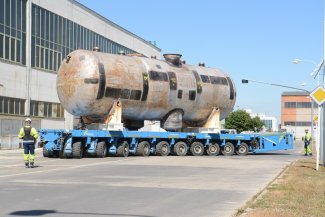 Transport of the last steam generator


Company JAVYS transported the last of twelve 145-tonne steam generator from the decommissioned V1 NPP in Jaslovské Bohunice. Transport of steam generators was a “unique” activity in the history of Slovakia and the V1 NPP decommissioning process now continues in the primary circuit.

The removal of each steam generator was preceded by a thorough preparation of a team of specialists. The load handlers had to plan it so that each piece could have been removed individually and safely from its original location and reloaded onto a remote-controlled transport vehicle. This is one of the reasons why we did not encounter any technical problems during the transport.

The process of transport of steam generators from the decommissioned NPP took place for the first time in Slovakia's history and was carried out on a special equipment borrowed from Austria. By transporting the steam generators, we transported a total of 1,872 tonnes of material, of which approximately 1,360 tonnes of metal will be returned to the recycling process.

The steam generators were gradually moved from the V1 NPP to the former V1 NPP turbine hall, where a special workplace is being established and a prototype of the cutting device for fragmentation is being developed (fragmentation - cutting). The fragmentation process will start on the 1st of September 2019.

“The EU co-funded programme for the decommissioning of Bohunice V1 reactors in Slovakia is amongst the most advanced in Europe with the ambition to be the first case of complete dismantling and site release for this specific reactor technology (VVER Russian design). The Slovak Republic put in place an organisation and forces on the ground, which are proving to be effective and efficient means to maximise the chances for this programme to become a benchmark for other decommissioning activities and eventually a success story to tell.”

The deadline of the V1 NPP decommissioning process is the year 2025.

In the Slovak Republic, Jadrová a vyraďovacia spoločnosť, a. s. (JAVYS) provides activities in the area of back end of the nuclear energy. Its key activities include decommissioning of A1 and V1 nuclear power plants, radioactive waste management, spent nuclear fuel management, management of institutional radioactive waste and collected radioactive materials in the territory of the Slovak Republic. In all its activities, company JAVYS, a. s. pays particular attention to safety, quality and environment protection. Within the V1 NPP and A1 NPP decommissioning process, a crucial objective of the company is the environmental site restoration.