Homepage › Information Service › News, Press Releases, Written about us › Press Releases › Austrian ambassador with a delegation at the repository inspection in Mochovce 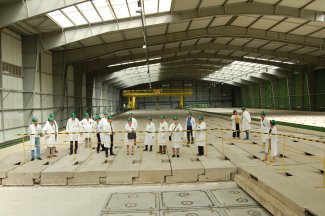 Austrian ambassador with a delegation at the repository inspection in Mochovce


The National Radwaste Repository (NRR) in Mochovce was visited on 7 June 2022 by the Austrian delegation, led by the Austrian Ambassador to Slovakia, Margit Bruck-Friedrich.

After a short introductory presentation about the RAW Repository in Mochovce, they inspected the second double-row for disposal of fibre concrete containers, followed by an inspection of the repository for disposal of very low-level radioactive waste (VLLW), which is used for soils from decommissioned A1 and V1 power plants in Jaslovské Bohunice, and finally inspected the storage of IRAW (institutional radioactive waste) and collected radioactive materials of unknown origin, while being accompanied by representatives of the Slovak Nuclear Regulatory Authority and management of company JAVYS, a. s.

During the visit, they were interested in protective barriers against the release of radioactivity into the surrounding areas and environment, planned period of the NRR operation and institutional control, as well as manufacturing, content and transport of fibre concrete containers.

Nuclear facilities operated by company JAVYS are visited by foreign delegations in order to become acquainted with the manners of safe and efficient radioactive waste management.

The National Radwaste Repository (NRR) in Mochovce is a surface-type multi-barrier repository intended for disposal of solid and solidified low-level RAW generated during the NPP operation and decommissioning, in research institutes, laboratories and hospitals in the Slovak Republic. The repository was put into operation in 2001.