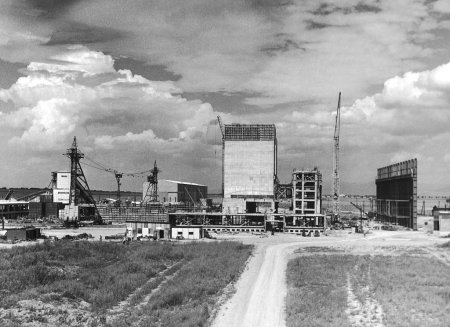 Construction of the first A1 NPP

The A1 NPP was the first nuclear power plant in the former CSSR. Work on the projects started in 1956. The A1 Power plant was designed as an experimental facility so it could verify the feasibility of using uranium as reactor fuel.

Its construction started in 1958. The project of the A1 power plant construction could rely on a firm foundation of advanced Czechoslovak engineering and metallurgical industries. The construction part was ensured to Hydrostav Bratislava, the general supplier, while the technological part was provided by Škoda Plzeň. Not without importance was the fact that Czechoslovakia had sufficient reserves of uranium ore and the facilities for the production of uranium concentrate. After completion of the power plant in 1972 and its testing, it was connected to the grid on 25. 12. 1972. The A1 NPP reactor, the KS-150, which used natural uranium for fuel (the fuel was not additionally enriched with 235U), was cooled by carbon dioxide and moderated by heavy water. Heavy water reactors showed to make much more efficient use of the fission material. Another advantage of the selected design was the possibility to replace the fuel while the reactor was running, i.e. the reactor did not need to be shut down for refueling.

Two serious accidents happened in the history of the operation of the power plant, both during refueling. The first occurred on 5. 1. 1976, when, as a result of a failure of the unit mechanism, a fresh fuel assembly was shot out off the reactor into the reactor hall. It was a technical failure. The second serious accident, however, was a human error, caused by the service personnel, on 22. 2. 1977. The refueling crew, putting together an assembly, neglected to thoroughly clean the fuel assembly from the silica gel, which was used for dehumidifying of the assembly parts for the duration of their transport. After putting the fuel assembly with the silica gel into the active zone, the silica gel restricted the flow of the cooling gas through this assembly. This caused it to overheat and consequently damaged not only the corresponding channel of the reactor but also the surrounding technological reactor channels. This damage caused, in turn, the heavy water to seep into the gas cooling circuit. The sharp increase in humidity in the primary circuit then resulted in damage to the casings of all fuel assemblies in the active zone. The failure of this barrier led to the contamination of the primary circuit and, due to leaks in steam generators, even to the contamination of some parts of the secondary circuit. Due to the high repair costs and the fact that new reactors of the WWER (V1 NPP) type were already under construction at Jaslovské Bohunice, the A1 NPP was not put back into operation. The Federal Government of the CSSR resolution No. 135/1979 then put a definitive end to the operation of the A1 nuclear power plant, ordering it to be prepared for gradual decommissioning.

Altogether, the A1 Nuclear Power Plant was in operation for 19,261 hours. It generated 1,464 GWh and supplied 916 GWh of electricity to the grid. It reached a maximum output of 127 MW. The construction and operation of this power plant helped form an important group of top experts and technicians in all the fields of nuclear energetics. The knowledge and experience gained by the operators were put to good use in the construction and operation of the other nuclear power plants at Bohunice.