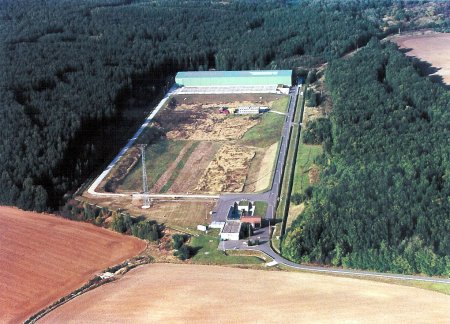 Locality of NRWR in Mochovce

The National Radioactive Waste Repository is a multi-barrier surface type storage facility, the purpose of which is the final storage of solid and solidified low activity RAW from the operation and decommissioning of NPPs, or from research institutes, laboratories and hospitals, from all over the Slovak Republic.

A suitable location for the facility has been selected, following engineering-geological and hydro-geological prospecting. The selection criteria were in compliance with current legislation, IAEA safety procedures, requirements for the placement of nuclear facilities, while also taking into consideration the actual proposed design of the facility and the properties and the type of the radioactive waste to be stored. Construction started in 1986 with the laying-down of a clay sealing bed, an important separating barrier standing between the stored radioactive waste and the environment. Since the storage compound was classified as a nuclear facility, stringent demands on working standards applied. Due to this, and also due to recommendations of an IAEA international mission, several changes were proposed and realized, the aim of which was the increased nuclear safety of the storage facility. The storage was put into service in 2001.

Protective barriers against the escaping of radioactivity into environment are in this case a matrix, in which the waste is fixed, the walls of fiber-reinforced concrete containers (FCC), the steel-reinforced concrete structure of the storage facility itself, the filling between individual boxes, multilayer shielding on the top and the clay bed. The final barrier is the almost impermeable geological formation in which the facility is situated. The storage facility also features a drainage system for collecting and monitoring water, in the eventuality of extremely unfavorable circumstances, if water seeped inside the storage boxes. The drainage system is one of several engineering barriers that prevent negative influences of the storage facility on the environment.

The storage facility comprises an array of storage boxes, arranged in rows and double rows. The first double row is shielded by a steel hall. The Boxes are made of steel-reinforced concrete, measuring 18 × 6 × 5.5 m, the walls are 600 mm thick. In stage 1, three double rows, i.e. 80 storage boxes were constructed. Ninety fiber-reinforced concrete containers can be fitted into one box with each of the containers measuring 1.7 × 1.7 × 17 m, the walls of the containers being 0.1 m thick. The total capacity is 10,800 containers with a total volume of 33,480 m3.

The storage facility is receiving treated low activity waste, sealed with a cement mixture, in fiber-reinforced concrete containers that are brought in from the Bohunice Treatment Center as well as the Mochovce LRW FTF. After initial inspection, marked containers are unloaded from the transport into a storage box, to a predetermined position.

Due to the premature shutdown of the two V1 NPP units at Jaslovské Bohunice, the need for constructing new storing capacities for the deposition of radioactive waste from the decommissioning, within the existing NRWR Mochovce site, is growing.