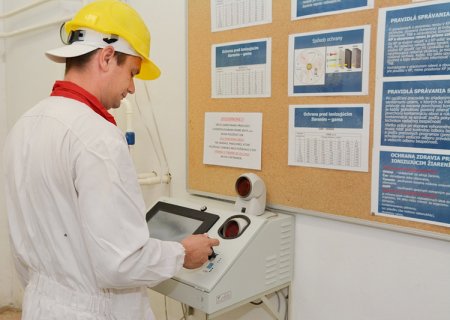 
In 2018 there was no radiation accident in facilities operated by company JAVYS, a. s. Regarding the specific maximal individual effective dose (IED) there was a year-on-year decrease by more than 20% compared to the year 2017.

Each year, company JAVYS, a. s., monitors the impact of nuclear facilities under operation in locations of Jaslovské Bohunice and Mochovce on working environment. Status of measured values is closely monitored and compared with specified authorized limits.

In 2018, on the basis of the Act No. 87/2018 Coll. on Radiation Protection, which became effective on the 1st of April 2018, the limit of maximal individual effective dose changed from 20 mSv/year to 15 mSv/year. Prior to adoption of the new Act, based on own internal decision, company JAVYS, a. s. used to have an even stricter annual limit of 15 mSv/year. After the new Act came into force and effect, our company reduced this limit to 13 mSv/year. Subsequently, appropriate technical and organization measures were adopted in order not to exceed this new specific value.

Despite the fact that decommissioning of nuclear facilities is being implemented predominantly in the controlled area (controlled are is an area of a workplace with controlled access, where the activities leading to irradiation, subject to specific requirements aiming at ensuring the radiation protection and preventing the spread of radioactive contamination, are implemented), maximal individual effective dose (IED) in 2018 was at the level 7.37 mSv/year. Compared to the year 2017 there was a year-on-year decrease of maximal IED by more than 20%.

During the previous year there was no radiation accident, no violation of the radiation protection rules on side of the employees or contractors and in 2018 all facilities of company JAVYS, a. s. were operated in accordance with decisions of state and regulatory authorities, particularly Public Health Authority of the Slovak Republic and Nuclear Regulatory Authority of the Slovak Republic.