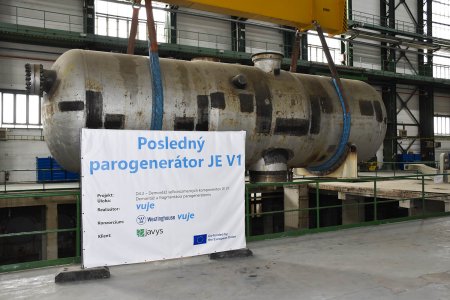 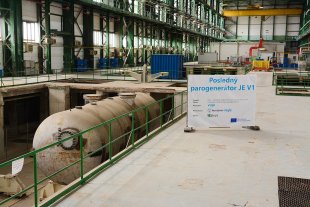 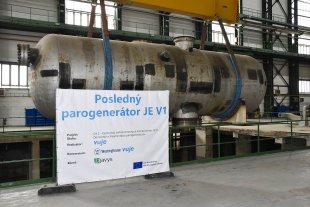 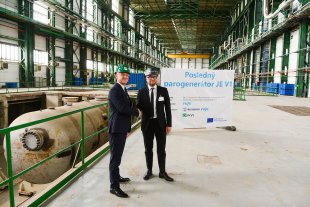 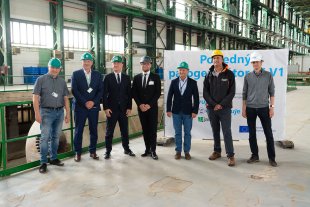 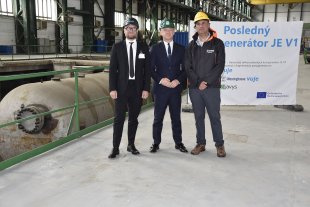 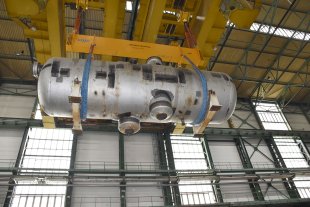 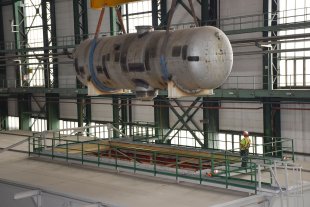 Fragmentation of the last steam generator


Fragmentation of the last of twelve 145-tonne steam generators started at the decommissioned V1 nuclear power plant in Jaslovské Bohunice.

These days, the fragmentation (cutting) of the last - twelfth steam generator – began at the V1 nuclear power plant in Jaslovské Bohunice. The weight of one steam generator is 145 tonnes, its length is 11.8 m and internal diameter reaches 3,210 mm.

The fragmentation is carried out by company VUJE, a.s., and a special prototype cutting device was developed for it in cooperation with the Technical University in Košice. The steam generators are being fragmented twenty-four hours a day, seven days a week by a team of twenty to thirty members.

Pavol Štuller, CEO of company JAVYS, a. s.
"It is a crucial milestone in the entire process of safe and economic decommissioning of nuclear facilities in Slovakia."

Matej Korec, CEO of company VUJE, Trnava
“A very important and significant outcome of this project is that we can release more than two thirds of the steam generator into the environment for secondary processing. The materials thus released are radiologically clean and there are therefore no restrictions regarding their further use.”

Pavol Štuller, CEO of company JAVYS, a. s.
The fact that our Contractor was able to achieve such a significant milestone demonstrates the quality of the Slovak industry and suppliers working in the nuclear power sector.

”Fragmentation of the first steam generator began in December 2019, the process of fragmentation consists of several steps.

A significantly important part of the project is the research of materials and their wear during the nuclear power plant operation.

Matej Zachar, Head of project - company VUJE, a. s.
“Material samples taken by our colleagues from steam generators and other parts of the primary circuit are further evaluated and can help to improve the operating parameters of nuclear power plants or in the development of new large components, while the results are of interest not only in Slovakia but also abroad.

During the fragmentation of twelve steam generators, company VUJE also had to tackle several unexpected technical issues. All of these have been successfully resolved and therefore, if the project is not to be delayed by any unforeseen circumstances, it will be completed approximately two months earlier than originally scheduled.

History:
Transport of twelve steam generators from the V1 nuclear power plant (NPP) to the former V1 NPP turbine hall, where the cutting workplace is located, was a unique "operation" in the history of Slovakia. The first steam generator was transported on the 13th of March 2019 at 11:00 a.m., the last, twelfth steam generator, on the 11th of July 2019 at 11:00 a.m. The transports were carried out using the special equipment, which was borrowed from Austria and a total of 1,872 tonnes of material was transported. Large weight of the steam generators during their removal from the original place for transport also required an enlargement of the openings above the steam generators and a special semi-trailer. The load binders had to plan it so that each piece could be individually and safely removed from its original location and transferred to a remote-controlled vehicle used for transport. Removal of each piece of steam generator was preceded by thorough preparation of a team of specialists and therefore no serious technical issues were reported during transport.

Two units of the V1 nuclear power plant in Jaslovské Bohunice were shut down in 2006 and 2008 and the end-date of decommissioning is scheduled for 2027.