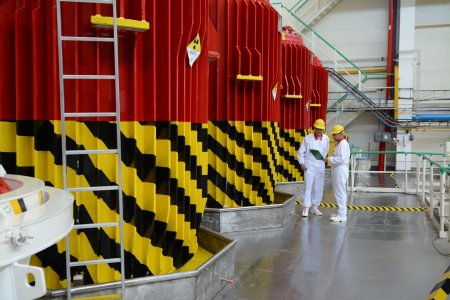 On the night from the 21st to the 22nd of June 2022 company JAVYS, a.s. (Jadrová a vyraďovacia spoločnosť, a.s.) successfully transported spent nuclear fuel (SNF) from Unit 1 of the Nuclear Power Plant (NPP) in Mochovce to the Interim Spent Fuel Storage (ISFS) operated by company JAVYS, a.s. in Jaslovské Bohunice under strict safety conditions, while being accompanied by armed forces.

144 fuel assemblies placed in special containers were transported by rail, while transport of spent nuclear fuel is subject to strict supervision and must comply with conditions of effective permits for handling and transport of spent nuclear fuel issued by the Nuclear Regulatory Authority of the Slovak Republic. Inspectors of this authority and other regulatory authorities were in charge of direct supervisory activities connected with this transport.

Transport and storage of spent nuclear fuel is one of the activities JAVYS, a.s. is responsible for. The company is a holder of required permits from the regulatory authorities, it employs expert personnel and has means necessary to perform this activity carried out with maximal attention paid to the environment, while observing high standards of nuclear safety.