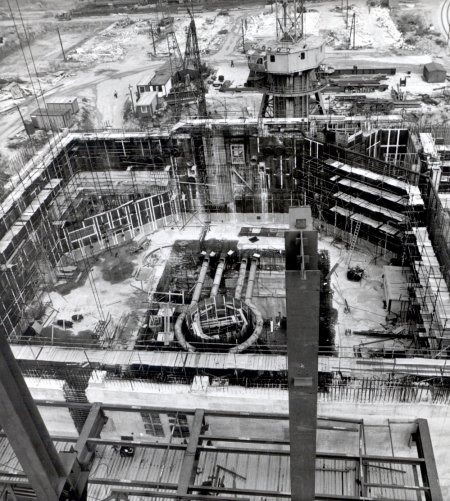 The story of the V1 NPP began in 1966, when it was decided to build a second power plant in Jaslovské Bohunice. Initially an A1 type power plant was considered, such as the one that was already under construction. In the end, Czechoslovakia accepted an offer from the former Soviet Union, to build a power plant with a V230 type WWER pressurized water reactor, with a capacity of 440 MW. The decision to turn towards pressurized water reactors proved to be right, since this type has a predominant position in the world, earned by its simplicity, reliability, safety and small size. The decision to build the power plant at Jaslovské Bohunice had several advantages, such as the utilization of already existing construction site facilities, but more importantly the continuity of work for the supplier organizations and the utilization of experience of the investor’s and the operator’s workforce in the preparation, realization and commissioning processes.

The first unit of the V1 NPP reached the minimal controlled power level of the reactor for the first time on the 27th November 1978 and on the 17th December 1978 the turbo generator Nr. 11 was the first to be connected to the grid. At this point the era of operating the WWER 440 units in the Czechoslovak power system had begun. After that began the testing operation of this unit, and since the 1st April 1980 Unit 1 started working in the continued commercial operation mode. The second V1 NPP unit reached the minimal controlled power level on the 15th March 1980 and was connected to the grid on the 26th March 1980. After the test run, Unit 2 of the V1 NPP was put into continuous operation mode on the 1st January 1981.

TheV1 Nuclear Power Plant became the first industrial type Czechoslovak nuclear power plant, with fully mastered and serially produced equipment. From its putting into operation a high level of nuclear safety of this power plant was steadily increased, with more than 1,300 implemented technologic improvements. A minor reconstruction took place in 1991–1993. The process of nuclear safety improvement was continued in an extensive gradual reconstruction program in 1996–2000.

The last stage of the safety improvement process within the Gradual Reconstruction of the V1 NPP was completed by end of the fuel replacement downtime of the 1st unit on the 9th June 2000, which concluded the 10 year nuclear safety improvement process. The V1 Nuclear Power Plant became the pilot and the safest WWER 440/V 230 type power plant. It proved that nuclear power plants with this type of reactor can be modernized to required safety levels and, simultaneously, it showed the capability of the original equipment to operate in conjunction with “western systems”.